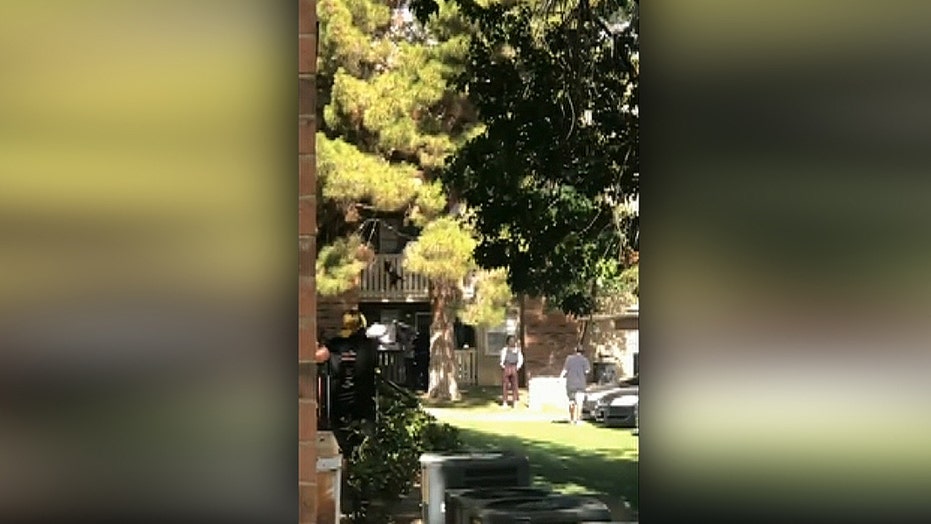 Good Samaritans help save children from an apartment fire

In a dramatic scene caught on camera, several children and a dog were thrown to safety from multiple apartment units during a fire in Arizona that damaged eight homes and left one woman dead.

The fire broke out on the third floor of the building on July 3, and a 30-year-old mother of two threw her 3-year-old son off the balcony in a last-ditch attempt to save his life.

The child was caught in the nick of time by a former Marine and wide receiver Phillip Blanks, 28, who scooped the toddler up and rushed him to safety, according to reports by ABC7.

The woman's 8-year-old daughter was also rescued as she dropped from the apartment's balcony. The mother, however, perished in the blaze.

Both children suffered from critical burns but are expected to survive, according to the Phoenix Police Department.

Below, in a separate apartment unit also affected by the fire in the same building, neighbors used a bed sheet to catch another child and their dog as they dropped from a balcony.

More than 100 firefighters responded to the fire and the majority of the damage was contained to the third floor.

“No firefighters were injured during this incident and the cause of the fire will be under investigation,” they reported.

Vandana Rambaran is a reporter covering news and politics at foxnews.com. She can be found on Twitter @vandanarambaran