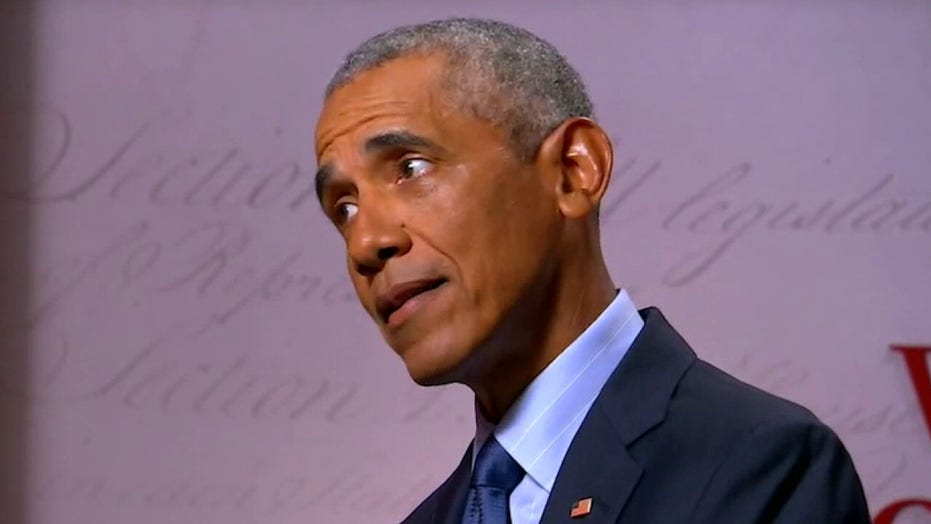 DNC night three: Obama goes low; push to get out the vote; Kamala walks a tightrope

In December of 2007, Washington Post columnist David Broder began a column this way: “Barack Obama has become a one-trick pony. But what a trick it is!”

Broder went on to summarize the rookie senator’s marvelous stump speech in the presidential race. He called the performance “a thing of beauty, a 40-minute oration delivered without notes that is powering his gains in the Iowa caucuses on Jan. 3 and the first primary here in New Hampshire five days later. Hillary Clinton has nothing to match it.”

When I later heard Obama give that speech, I wasn’t disappointed. It was everything Broder said it was.

Sure, the candidate made promises aplenty, but it was the energy and excitement of the crowds that made the difference, especially when Obama led them in concluding chants of “Fired up, ready to go, Fired up, ready to go,” then finished with “Let’s go change the world.”

The rest, of course, is history — and so is the Obama magic. He gave it a good try Wednesday night, and even dared rebuke cancel culture, saying how earlier generations overcame greater hardships than young people face today.

It was refreshing to hear a Democrat say that, but his larger task for the evening was to find the words to help push Joe Biden over the finish line. Alas, his former veep is proving to be a heavy lift and even Obama has never been able to transfer his special sauce to others when he is not on the ballot.

Wednesday night was no exception and I don’t believe he moved the needle in the race for the White House. As a result, Day 3 of the convention fell far short of the high expectations, raising the question of whether Dems will get any bump out of the virtual exercise.

In one sense, you can’t blame Obama for not being able to pull off a miracle. Despite their public demonstration of being best buds after eight years in the White House, they have a complicated relationship.

Everything is riding on Biden’s acceptance speech.

Recall that Obama didn’t encourage Biden to run for the presidency either four years ago or this time, and didn’t endorse him until there were no other opponents. Obama clearly doesn’t believe Biden’s cut out for the Oval Office, and there have been recent reports about sniping between their camps, so there is clearly some lingering bad blood.

But if Obama failed Wednesday night, he was not alone. Sen. Kamala Harris’ VP-acceptance speech was sufficient, but not more. She revealed no great passion or conviction, almost as though she was just happy to be there and that was enough for one night.

Hillary Clinton, on the other hand, did meet expectations — the lowest ones. She griped, again and still, about losing in 2016 and said Dems had to vote early so Trump can’t “sneak and steal” his way to victory.

Doesn’t she ever get tired of herself?

Unfortunately, the party’s attempt to lay out key parts of its agenda, sorely lacking up to now, was almost incoherent.

And annoying, as the speeches and segments felt like one lecture after another. On gun violence, environmental policy and immigration, the aim seemed to be to hector voters rather than persuade them.

My low point came when singer Billie Eilish told me how I had to vote to save America. She’s 18 and has green hair.

Overall, the issues weren’t clearly explained in sensible and actionable detail. Gun violence, for example, was presented as the evil problem, without any distinction about different types of guns and what potential solutions were. Naturally, the Second Amendment wasn’t mentioned, a mistake that once again provides an opening to the Trump campaign.

Especially these days, with murder, violent crime and riots destroying decades of public-safety gains in most cities, the idea that Dems are anti-gun will likely strike some voters as more of a problem than a solution. Already gun sales are reaching record levels.

On that point, there has not been a single condemnation in any of the convention’s three nights of that epidemic of violence. But once again, there was lots of support for Black Lives Matter, including from Obama, which is, at heart, an anti-police movement.

With the first three nights in the books, the burden now falls where it ultimately belongs — on the presidential nominee. Everything is riding on Biden’s acceptance speech.

If he hits it out of the park, little that came before it will be remembered or matter. If he flops, then the convention week, and maybe much more, has been lost.