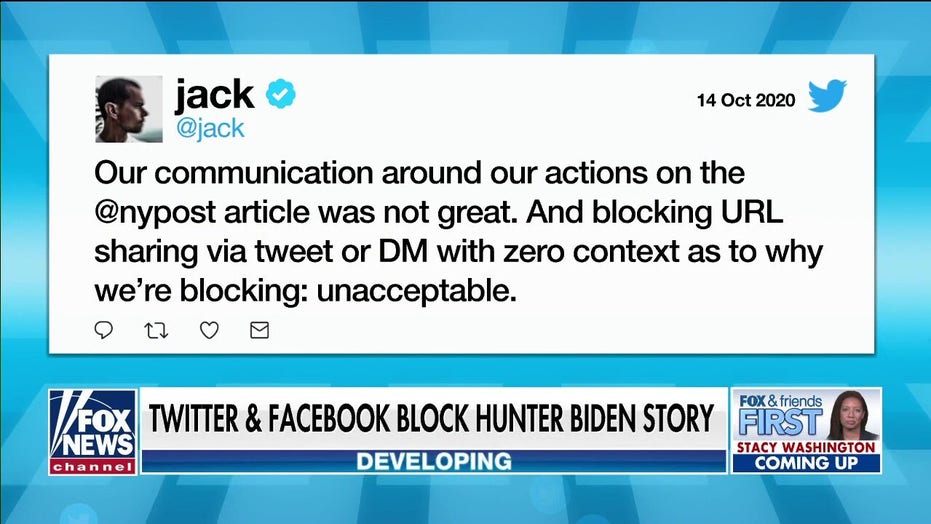 Thank goodness Twitter boss Jack Dorsey stepped up, put his personal feelings about Trump aside and held his own company accountable, says Patrice Onwuka, a senior policy analyst at the Independent Women's Forum.

Twitter faced unrelenting backlash after blocking the spread of a New York Post bombshell that was highly critical of Hunter Biden on Wednesday, as critics pointed out the platform gave no such treatment to stories from CNN, The New York Times and other media with highly questionable sourcing.

CEO Jack Dorsey even admitted his company was wrong to intervene on the Hunter Biden story without sufficiently explaining why.

Dorsey called his company’s actions “unacceptable” after Twitter initially claimed it took action against the article due to the company’s “Hacked Materials Policy.” Twitter had blocked the article from being shared on its platform and suspended several accounts for posting it, prompting Republican lawmakers to demand a probe into what they called blatant censorship.

Conservative comedian Tim Young, who has used Twitter to build his name recognition, blasted what he called the platform’s hypocrisy.

“After three years of anonymously sourced, disproven stories with no evidence pushed by CNN, The New York Times, Buzzfeed, the Washington Post -- just to name a few -- about Trump, Twitter suddenly decides that a story that makes Biden look bad is what they should edit,” Young told Fox News.

The New York Post report, entitled “Smoking-gun email reveals how Hunter Biden introduced Ukrainian businessman to VP dad,” touched upon suggestions that the former vice president’s son had unscrupulous financial and business ties to a natural gas firm in Ukraine -- Burisma Holdings -- and that his father later stepped in to have a probing prosecutor fired for looking into the matter.

The article, which Fox News hasn’t independently verified in full, also claimed that the outlet had been given emails showing Hunter had introduced his father to a top executive at the energy firm, less than a year before the prosecutor was forced out.

The claims were extremely damning to the Democrat less than three weeks before the election, so Twitter’s initial decision came off as a clear attempt to shield the information from voters, critics said.

But, similar stories seen as damning to President Trump, his allies or other conservatives have spread on Twitter all the time – so critics were quick to point out the apparent double standard.

“If there was a policy about hacked documents not being allowed on Twitter, why hasn’t every Wikileaks or Edward Snowden post been banned? Twitter and Jack have pulled back the curtain 100 percent now,” Young said.

“If it’s a negative story about Trump, including something as ridiculous and unfounded as the pee tape story, they’ll make it trend. If it’s about Biden or the Democrats, they’ll do anything they can to suppress it, including silencing a major media organization,” he continued. “I wonder if Twitter will allow a link to this story - calling their bias out - to be posted on their site?”

Daily Caller reporter Chuck Ross sought out to prove the platform’s double standard by posting a series of widely criticized or debunked stories that coincided with the liberal agenda. He shared “the Yahoo story that was based on fake info from Christopher Steele,” a “debunked McClatchy story that was probably planted by Fusion GPS” and “Slate’s debunked Alfa Bank story” but all of them were able to remain on his Twitter feed without any issue.

Young joked, “I could literally write, ‘President Trump’s motorcade ran a bus full of elementary school children off the road,’ which obviously would never happen... and Twitter would make the ridiculous hashtag #TrumpHatesKids trend No. 1 for a day.”

Young said when it came to stories about Democrats, something as simple as “Biden sneezed” would get “fact-checked and flagged as at least partially false, on a technicality that even though he did sneeze, it was at a different angle than what it was initially reported.”

“This isn’t about double standards. This is about one standard. Twitter and Facebook have decided they are 100% behind Joe Biden’s candidacy. They no longer trust a fair election, so their goal is to make it as unfair and undemocratic as possible,” Gainor told Fox News.

“Big Tech is getting a big lesson and what’s called the Streisand Effect,” Gainor added. “If you try to censor information, you make the story even bigger. Wrongdoing is seldom what trips up candidates. It's always the cover-up.”

Fourth Watch editor Steve Krakauer wrote that Twitter’s hypocrisy was exposed and slammed mainstream outlets including CNN and MSNBC for ignoring the censorship.

“Was the media outraged by this egregious action? No. They were muted. But, it’s not surprising. The slippery slope of censorious tech cheerleading by talentless hacks who make up our current media landscape brought us to this moment today. This is on them, but even more on their organizations. CNN and their JV media team. NBC and their ‘disinformation reporters,” Krakauer wrote, referring to far-left CNN and MSNBC staffers who were quick to condemn “misinformation” that fit their agenda but were silent about the Hunter Biden story.

“A press that cares about truth would take the Post story and dig deeper, would be interested, would be outraged by the reaction from tech platforms. But, our current press is not serving this mission - it’s first and foremost interested in ensuring Donald Trump leaves the White House,” Krakauer continued. “No journalistic standard is too important to abandon in the service of this goal.”

Many took to the embattled platform to share their thoughts: