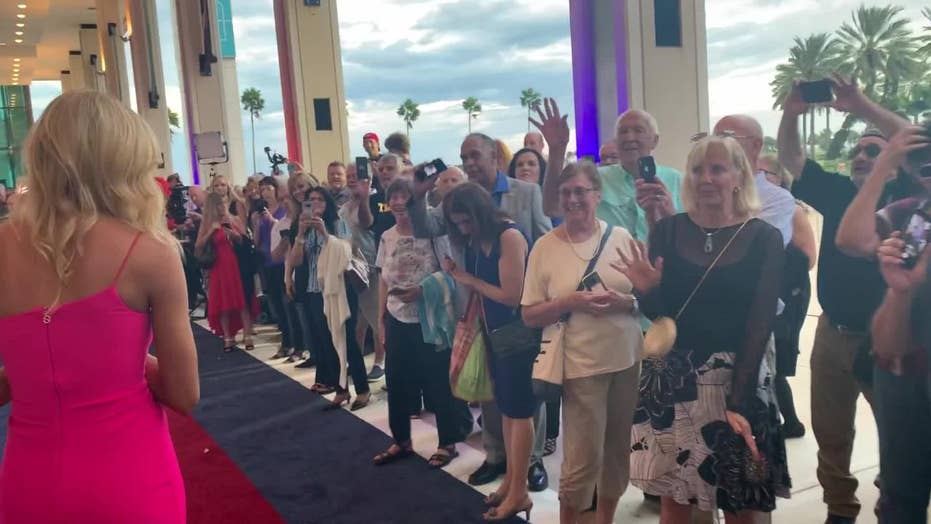 BEHIND THE SCENES: Abby Hornacek on the red carpet at Fox Nation Patriot Awards

The highly anticipated red carpet event featured a lineup that has been dubbed the "Golden Globes of conservative media," and the event aims to honor "everyday American heroes who have shown steadfast dedication to our nation."

Despite the rain, attendees waited in line for hours before getting the opportunity to meet some of their favorite Fox News personalities, including "Fox & Friends" co-hosts Brian Kilmeade, Steve Doocy and Ainsley Earhardt, as well as Fox Nation favorites including Tomi Lahren, Abby Hornacek and others.

Fox News caught up with fans outside the venue. Elaine, who runs a Christian non-profit organization, said she came from Arizona to honor her husband's memory, who passed away eight weeks before the event.

"My husband was a wonderful patriot, he was in the Air Force... and that's why I'm here... to honor him," she explained.

Her sister Mary traveled from Cincinnati hoping to "unite with her Fox family."

"I just want to see the Fox hosts in person because I see them every day and they're my family," she said.

"Yes, we came here to enjoy the family of Fox," Elaine chimed in.

When asked to choose their favorite Fox News hosts, the two sisters had a hard time, but agreed that "Ainsley's Bible Study" on Fox Nation was among their top choices.

Candace, a retired RN, drove over three hours from the Villages to attend the event to show her support, she explained.

"I was a former Democrat... and I started watching Fox News around the 2016 election beginning with the morning shows and I said 'omigosh, I found my people,'" she said.

Live from the red carpet at Fox Nation's Patriot Awards!

Mark and his wife, Dorthy, an oral surgeon from St. Petersburg, said they enjoy all of the content on Fox Nation, but a recent "Modern Warriors" episode featuring former Navy SEAL Rob O'Neill stood out as their favorite.

"We needed an award show to honor first responders, nurses and veterans. We're here to support and stand in solidarity with them," Mark told Fox News.

Fox News also caught up with two local veterans at the event, who became emotional discussing the significance of honoring American patriots.

"I spent 30 years in the Marines... this is phenomenal," they explained.

"We will showcase the unsung heroes who went above and beyond for our country. As an Army veteran, I could not be more honored to emcee this historic evening. St. Petersburg is a natural place to host it — a town full of patriots and Fox News fans," Hegseth said before the event.

Other famous guests set to attend include country music singer-songwriter John Rich who will perform at the show, the casts of "Duck Dynasty," "Dog, The Bounty Hunter" and many more, who are coming out to support American patriotism at its best.

Fans weren't the only ones excited to be a part of the event. Ed Henry, host of "Ed Henry's Front Row Seat" on Fox Nation, said he anticipated an overwhelming turnout, judging by the last Fox Nation event, which exceeded all expectations, he explained.

"We did the first one in Arizona and the turnout was probably bigger than anyone expected...we had people in Arizona who had driven from Texas... all the way from Montana, and I think that is the credit to the loyalty of our viewers on all platforms... whether it's TV or digital," Henry said. "This time, with the Patriot Awards, I feel like we're taking it to a whole different level because were thanking everyday people for extraordinary acts and it's something that's simple but worth soluting," he added.

Behind the scenes as Pete Hegseth prepared to take the stage.

"I find it fascinating that a lot of actors and entertainers have 22,500 award shows a year and that's great... I'm not knocking the free market -- but the value added by our cops, teachers, and servicemen are far more significant than acting in a movie," he said.

Once inside the event, fans waited in line to get autographed photos, signed books, and take snapshots with their favorite personalities, who generally made themselves available to the public even as they walked to different areas of the event or when they headed to the live broadcasts, which is currently streaming on FoxNation.com.

Fox News also caught up with Fox Nation favorites "Diamond and Silk" as they posed for pictures with excited fans.

"This event is so important because we have patriots out there who serve our country and do a good job and they're never noticed," they said.

"Tonight, we honor them. This evening is about them, their families, and the sacrifices they've made."

Live from the red carpet at Fox Nation's Patriot Awards.

All proceeds from the event will be donated to the Folds of Honor Foundation, a non-profit organization that provides educational scholarships to spouses and children of America’s fallen and disabled service-members. Founder and decorated Air Force veteran Dan Rooney was among the recipients of the Patriot Awards, receiving the title of "Ultimate Patriot."

Other honorees include Tampa police lieutenant Travis Maus who is currently deployed in Iraq, Charlie Hecht, a 14-year-old who turned his neighborhood into a display of American patriotism to honor U.S. servicemen, wounded veteran and marathon runner Rob Jones, and more.

The full 'Patriot Awards' featuring your favorite Fox personalities can be live-streamed 6:15 p.m. Wednesday on Fox Nation for subscribers only.

FNC will present a one-hour program dedicated to the Patriot Awards on Sunday, Nov. 24, at 10 p.m. ET.